Construction “on a knife-edge”

The latest Construction Skills Network report from the Construction Industry Training Board (CITB) suggests the health of the construction industry over the next five years is on a knife-edge, heavily dependent of a few politically sensitive infrastructure projects of huge scope, according to new industry forecasts.

The 2017-2021 Construction Skills Network (CSN) report predicts growth of 1.7% over the next five years, with 179,000 jobs to be created, reports The Construction Index this week. 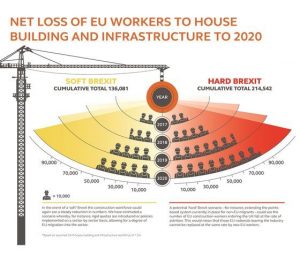 A year ago (read our blog post), before the EU referendum, CSN was forecasting 2.5% average annual growth and 232,000 new jobs needed. After the referendum, CSN downgraded its growth forecast to 2% a year and industry-wide recruitment need to 157,000 (we noted the potential Brexit impact in June 2016, and highlighted the Brexit views of Arcadis in November 2016 too).

The new CSN forecast suggests the fortunes of the post-Brexit construction industry are heavily dependent on the big politically sensitive infrastructure projects starting main works on time as infrastructure represents 45% of all predicted construction growth over the next five years.

With the UK withdrawing from the EU, job growth in the UK construction industry will be slower than indicated in last year’s report, but construction overall still needs 35,000 new workers every year.

As these projects are particularly politically sensitive, the report makes clear that the forecasts are heavily qualified, making it unclear what weight should be put upon them. “All predictions for the construction sector are made against a backdrop of ongoing political and economic uncertainty. The impact on the construction pipeline of Britain’s vote to leave the European Union is one of the most significant unknowns,” the report says.

“As wider economic turbulence can affect many parts of construction, the commitment to infrastructure is helpful to the forecast. But, with output growth so reliant on these major projects, any shifting of the goalposts on, for example HS2 or nuclear new build could be felt throughout the industry. If, for example, Hinkley was taken out of the pipeline, total construction output for 2021 would be 0.8% lower than currently predicted. And the reliance on large infrastructure projects means that forecasts, particularly those made over the longer term, are less balanced than in the past.

“However, the changing of the guard at the top of government in the UK has, so far, not affected its commitment to the National Infrastructure Delivery Plan. The government is still pledged to invest over £100 billion in infrastructure by 2021.”

“Profitability remains a concern, with the volatility of material and labour costs squeezing margins. The situation is not helped by deteriorating levels of productivity, and there is also the prospect of a potential gap in the labour market resulting from any changes to immigration policy.”

“We expect construction to keep defying the economic headwinds, with almost half of its growth coming from Hinkley, HS2 and Wylfa and other infrastructure projects.  These huge projects give our industry a great chance to seize the initiative on skills and start investing in the next generation and upskilling the current one. So it’s vital that we don’t throw this opportunity away by allowing these projects to slip or get squeezed together and worsen the pressure on key skills.”

“While we are forecasting slower growth for our industry than we were last year, employers will still be creating tens of thousands of new jobs. We will be working with employers to attract new talent into our industry and to train them for rewarding careers in the sector.

“While we have factored Brexit into this forecast, there remain many unknowns to life after leaving the EU. We will be working with our industry to understand what it means for our migrant workforce and what we must do to attract and grow more of our own.”