The Government’s new Housing White Paper, Fixing our Broken Housing Market, mentions skills 20 times (most of the mentions are on page 41) in a largely underwhelming document over 100 pages long. However, it doesn’t say anything particularly new or radical about skills – though this is perhaps to be expected from a Conservative Government writing about an inherently conservative industry (and house-building is, arguably, the most conservative sector within construction).

It makes a passing mention of Mark Farmer’s review, Modernise or Die, published in October 2016 (read our post), touching on his advocacy of offsite fabrication (read this Construction Index summary, for example), and acknowledges that the industry faces particular challenges in certain regions, such as London and the South East, as Brexit looms. It continues:

“This is an important moment and we should make the most of the opportunity for industry to invest in its workforce, alongside tackling the issues raised by the Farmer Review. The larger companies need to take responsibility for ensuring that they have a sustainable supply chain, working with contractors to address skills requirements.”

Three areas are singled out for Government action. It says it will:

The white paper then highlights what can be achieved from investing in training as part of major construction programmes such as Crossrail, to see whether this approach can be applied more broadly in the construction sector, particularly by holding developers and local authorities to account. This is mainly about improving transparency of the end-to-end house building process, and identifying where blockages lie (encouragingly there are three mentions of “transparent data”). This could be an areas where SkillsPlanner’s modelling of supply and demand of construction skills could play a crucial role, as Mark Farmer pointed out last year. 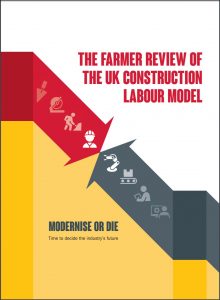 “The increasing importance of data means that such approaches would better enable the business case for investment in training and new ways of delivering by better aligning investment to a demand pipeline. … The culture of ‘data silos’ within the industry needs to be broken as part of the wider societal democratisation of data.” 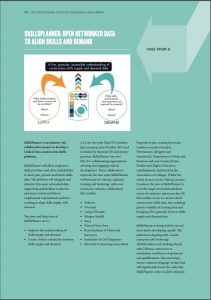 It was with some trepidation that we looked at the latest UK Government Construction Strategy 2016-20, released last week (available here). The previous strategy, Construction 2025 (published in July 2013) and the wider-ranging Digital Built Britain strategy (February 2015 – read our July 2015 blog post: Building a better built environment industry) were both produced under the coalition government, but the current administration has reduced some elements of government engagement with the construction sector – the Construction Leadership Council was pared back, and the post of Government Chief Construction Advisor was discontinued. Would the Government, collectively construction’s biggest single client, be reining back its industry ambitions?

The initial signs, however, are encouraging. The direction of travel remains broadly the same, with heightened commitment to “digital and data capability,” and to improving the sector’s skills and resilience. In the ministerial forward, Lord Bridges says:

“we need to improve skills, both within government and the construction sector overall. Our strategy aims to improve government’s capacity and capability as a client, while helping the sector recruit and retain skilled employees.”

The body of the strategy mentions apprenticeships (“delivering 20,000 apprenticeships through central government procurement over this Parliament”), it talks about the need for skills in building information modelling (BIM; read our previous post: Tackling skills gaps: can we learn from BIM?) – still a major component of the digital vision – and then underlines the major skills challenges:

“Employers are facing difficulties in attracting skilled employees and 13% of employers reported not having enough skilled employees for some of 2014. This skills gap, if not addressed, will lead to inflation and reduced productivity in the way the industry operates. … Young people are currently underrepresented in the construction industry compared to the economy as a whole, only around 10% are aged between 19 and 24.”

Interestingly, to support its skills drive, the strategy says the Construction Leadership Council is developing a guide on what good skills investment looks like, to aid both government procurers and the industry when bidding for future government contracts. And since publishing its National Infrastructure Plan for Skills (September 2015), Infrastructure UK, now part of the Infrastructure and Projects Authority, is developing a tool to help clients utilise pipeline data to model current and future skills requirements. There is also talk of “sharing market intelligence.”

We hope these ambitions are carried through, and that there is a lot of joined-up thinking. As we have previously argued (Data for efficiency and growth), there is considerable scope to take the government’s enlightened approach to open data, and to pair this with ongoing initiatives – such as SkillsPlanner (part government-funded through Innovate UK) – that are focused on improving the match of skills to jobs and enabling training provision to be responsive to industry needs.